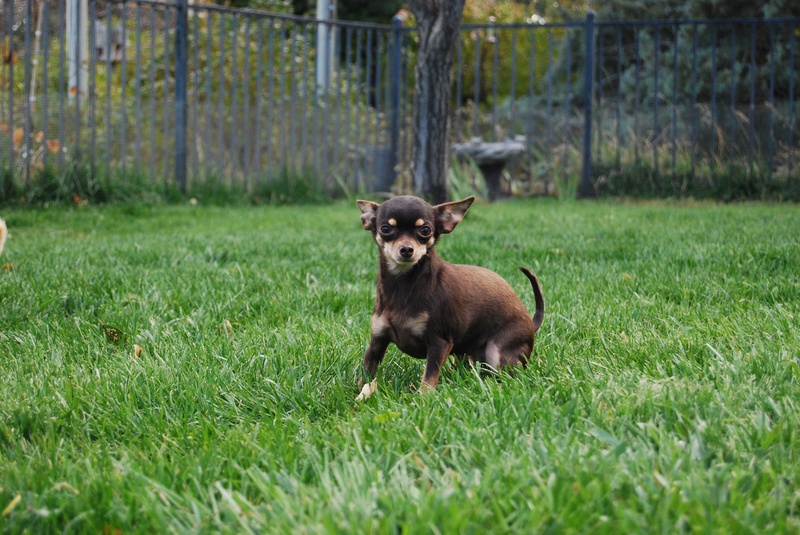 Kira has Cerebellar Hypoplasia.  This causes jerky movements, tremors and generally uncoordinated motion.  She has some difficulty walking but gets around nicely.  The tremors do increase when she is excited and subside when she is at ease.  She is 2 years old, spayed and a cuddler (as of 12/2010.) She has been in her forever-foster home since she was 1 year old, when her former person relinquished her because "she was too much trouble."  She is the tiny "watch dog" and makes sure no one comes into her home without her knowing it...and for the person coming in...they "know it too!" She is only three pounds and full of "terrier-like qualities." She likes some people, however it does take time for her to overcome her fear of new people.  She will bite the stranger's hands and often tries to keep them from entering the house by grabbing their pant legs.  For those who know her, they love her!

Tigger - aka The Good Luck Dragon!

While Tigger looks very "sweet" he is fearful and with the wrong person will bite! He was found in Incline Village running the streets.  He had to be caught and photographed while the person wore the protective sleeve! He has come a very long way since last year, but still will nip if a new person arrives in his yard.  He is a real cuddler but still is being counter-conditioned and desensitized so have his nails finally trimmed.  Always makes us wonder when they have a tag for ID on them ... why isn't the tag updated so we could have united him with his family? So, Tigger is with us, 2 years old, male, neutered, up to date on his vaccinations...if you are interested...you would have to commit to him and all his issues...so until the perfect home is found, he is forever with us.

Daisy Mae has a very sad story. She was dropped off in a small airline crate at the door of animal services without even a note. She was so very afraid they couldn't even examine her. When we rescued her we knew we were in for some work. For months she'd run if you approached her and always hid.  She now will eat out of her foster mom's hand, but still is very cautious and simply wants to be near, but not touched. One can only imagine why this tiny little dog is so very afraid of people. So she enjoys her life in her foster mom's home, runs with the others, sleeps next to some while still being very cautious not to be touched. We love her and will let her make her move when she is ready. We are not in a hurry - she has come so very far.

Oops! This site has expired.

If you are the site owner, please renew your premium subscription or contact support.